The scale of things... 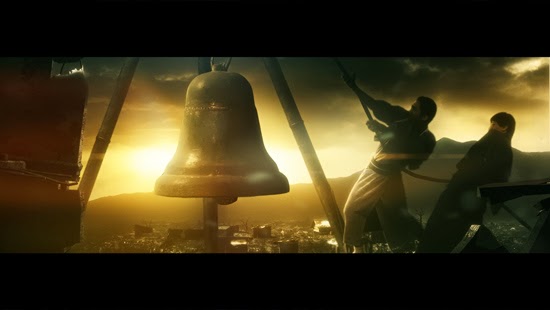 Following on from the blogs we wrote on how we often use more traditional techniques for special effect shots, we've just completed a sequence for All That Remains that relied heavily on a miniature model.

The sequence required two actors to unearth a cathedral bell that has been buried beneath a pile of rubble (from the atomic blast) and to then raise it on a make-shift stand, with the scene ending on the bell ringing out once more across the wastelands of Nagasaki on Christmas Eve night.

It’s a very important scene in the film (and a very symbolic one) so we spent a lot of time experimenting with different ideas for how we were going to pull this off. After rendering some test footage with a computer generated 3D version of the bell, we decided to opt for a far more traditional technique.

Model miniatures have been used in the field of film special effects since the very beginning; in fact, one of the iconic images from the early film period is a still from George Melies' A Trip to the Moon – which shows the man in the moon with the rocket stuck in his eye. The effect was achieved with the use of miniatures.

Maybe the most magical aspect of miniatures is that, even today, with the stunning photo-realism that can be achieved with CGI, miniatures are still very much part of the special effects tool box, and indeed, in many cases, the best tool for the job.

In our case, the miniature was shot against a greenscreen and was then composited into a CGI rendered backdrop with the two actors (also shot against greenscreen) – so it was very much a case of traditional and modern FX techniques working together to achieve our effect.

We've just released a new trailer for All That Remains - you can check it out on our Facebook page!


Posted by Ian and Dominic Higgins

Ian and Dominic Higgins
are digital filmmakers and artists with a passion for telling good stories. They are the owners of Pixel Revolution Films.

Get behind our movie!

Check out our new movie project...

Our art and photography gallery